The Secret of Life

I set my sweaty and cool hand against the small of my father’s back.  He had long ago started to slow, the wheels of the second hand bicycle below him gathering an inertia throughout the three hours of riding that day.  But we were on the last obstacle of the day, the “bumpy road”, that still makes me think my father’s propensity to find the back way anywhere. This ride was our first big outing, after he had reminded me over the course of an entire semester at Penn State to bring a bicycle home for him.  Until that day, he had been suffering through short rides on his own, but we both felt it was time to get out for a big adventure together. It was time for him to do something that he never thought was possible. And we were at the end of that thing.  When that impossible thing, starts to feel right on the edge of possible.  I had avoided aiding him until that moment, when his pace slackened on the last hill of the day and the potholes threatened his slowing front wheel. I rode up alongside him and began pushing him slowly, silently through the last obstacle of the day. The symbolism of the moment was not lost on either of us, but so powerful was the moment, not a word was spoken.  All that was exchanged was a silent and tearful embrace when we got home.

My father’s strongest and most repetitive lesson through life has been humility.  He has said some variation of the following quote dozens of times, “Recognizing our weakness may be one of the only keys to our strength.”  It certainly is not something that comes easy to either of us, as we both also have an intense desire to be strong and capable. Mistakes and failures often gut me as I know they do him as well.  But we both have learned, through failure, to let go of that desire, let go of guiding the future as we see fit. Life just won’t go as planned, no matter how hard you try. I had to accept that I had placed all my chips on a failed marriage, something for which I had to accept my share of the blame.  And he had to watch the love of his life, our lives, slowly die, far too early.

My father has learned how to give himself over to the despair and failure.  Only in recognizing how truly weak we are, do we realize how much we really need one another.  My father has found someone who makes him immensely happy.  I know that he and his children are grateful that he had the patience to sit in his grief and not accept anyone except Laurie.

He retires in a few short months and the world is at his fingertips.  In accepting his fate, not trying to guide his future, he can be the man that once found meaning in every love song he heard on the radio. 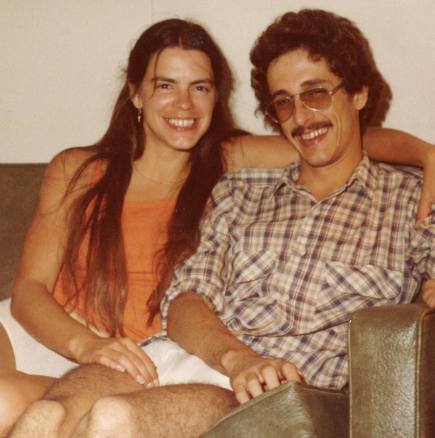 …and after much pain and grief, have it all again.

I love you Dad and I am so happy for you, Laurie, and your new adventure.

4 thoughts on “The Secret of Life”